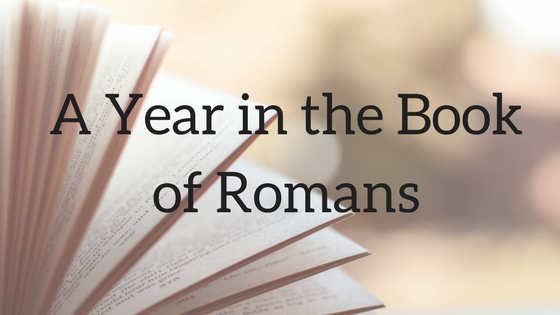 I had the opportunity to participate in Bible Study Fellowship this year with about 300 other women in our current community. If you participated in BSF in past years you may be surprised to learn that the rules are loosening. No longer do we always answer every question and we have a lot more time to chat and get to know each other as a group.

I’ve loved my small group and have really enjoyed time with them both during small group and outside of Tuesday mornings. I’m so thankful for the friendships that have formed. I believe that studying Romans together has helped us drop the surface conversations quickly and deep dive into the important things.

It hasn’t been an easy book to study this year, but I can’t argue with the relevancy of the Bible when I read Romans. Paul could have been writing to the United States in 2017-2018, and in some ways, he was. At the same time, I think Romans is a book that many people skim through to avoid the “hard parts” which really aren’t as scary as others may lead you to believe.

Our group leader did an amazing job of encouraging us while also not letting us get away with short answers. She asked insightful questions and she was also willing to learn alongside us.

As I reflect on the key things I’ve taken away from a focused season of studying the Book of Romans I realize the list is shorter than I expected it would be. Paul lays out a clear understanding of the Gospel, and he makes a strong argument for “right living”. And maybe that’s why people have a hard time with Romans. While nuance is present in some sections, many are pretty clear. Do this, not that.

Here are a few examples:

Romans 13:7  “Give to everyone what you owe them: If you owe taxes, pay taxes; if revenue, then revenue; if respect, then respect; if honor, then honor.”

Romans 13:13 “Let us behave decently, as in the daytime, not in carousing and drunkenness, not in sexual immorality and debauchery, not in dissension and jealousy.”

While you may be tempted to say “Everything? that didn’t include foods we have now. If Paul knew about ____ he’d have written that differently.” Um NOPE! “Who are you to judge someone else’s servant?”

The Contrast is Clear

Ultimately, this season studying Romans put a giant spotlight on the division that currently dominates many news cycles. The church is deeply fractured and none of the issues we are facing now are new ones.

Through it all, God is still God.

The most important take away for me is that God is so much bigger than we allow him to be, and our calling has more to do with our relationship with God than any other aspect of our lives.