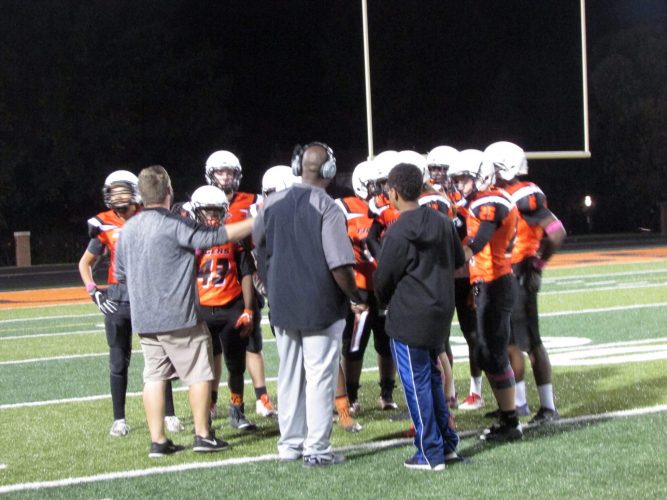 We arrived early to our last football game. At the parent’s request, I was tasked with taking Senior Day Family pictures. I wanted to make sure we were set up well and was busy figuring out where to stand to get the best angle.

High school football players have a bit more of a relaxed attitude about the sideline, which can be great, or it can be negative for younger ears. I was nervous about what they may hear or see but there was nothing more to be done.

I will summarize the evening by saying I’m sure a decisive win helped with positive attitudes and kind hearts towards my sons, but I have been on the sideline for many games this season and this week the air was different.

As our boys filled water bottles, filled cups, and attended to those on the sideline as well as those on the field the players displayed a new level of patience I have not seen before. They didn’t grow frustrated when a timeout was called and water was not immediately there. They took turns hydrating and even went so far as to place the water bottle back in the carrier instead of simply tossing it to the ground.

Our team seemed acutely aware that the coach’s sons did not need to serve them in this manner. They seemed to understand that it was a privilege to have the responsibility of hydrating each other lifted from them for the evening and although gratitude is probably taking it too far, this team seemed to begin to understand how important they are to our family.

For eight years through high school and college, I volunteered as a student athletic trainer. Every weekend through Football, Soccer, Wrestling, Basketball, and Baseball I filled water bottles. I traveled with teams and I learned to love people in a different way. Years ago I began to plant the seeds of the importance of serving our teams in this small but important way. I never dreamed this result would occur, but I’m so thankful I was able to witness it unfold!

Our boys learning to fill water bottles in 2011

My heart could not stop swelling as I watched my sons work as a team the two of them dividing responsibilities up as well as working efficiently. As I smiled and snapped the occasional picture I heard God speak to my heart in a new way.

This is what delight feels like, Beth, and the small amount you delight in your children right now barely compares to the way I delight in you and them each day.

3 thoughts on “Football a Family Service”