Inspiring women in the public eye to pursue their calling and thrive in their purpose.

Last weekend Ordell and I traveled 6 hours to meet up with several coaching families for two days. While he spent most of two days listening to presentations, gathering information about football formations, strength training ideas, and other strategies I caught up with friends we hadn’t seen in several years.

As we compared notes on our teams, kids, moving experiences, and jobs I couldn’t help but smile at how quickly our group fell back into easy conversation.

There are always exceptions to the rules, but I’ve learned that 99% of the time distance does not impede coaching families’ desire to support each other.  Whether it’s late-night phone calls, group texts, watching games online or traveling on a bye-week to cheer from the stands for other teams, coaching families celebrate and mourn with each other even after we depart for different staffs.

As great as it is to stay in touch with those we used to be on staff with or once coached, nothing compares to uninterrupted time laughing and reflecting on crazy adventures lived together.

Reflecting on the Impact of a Coach

For many in this group, our early coaching experiences were influenced by the opportunity to be on staff under the couple in the center. It’s been 15 years since we left Andy’s staff and even though he’s now easily identified by his silver beard, I’ll always remember the day he was named head coach of my now alma mater.

Andy recently celebrated his 50th birthday and as part of that celebration, our group took time to reflect on our how life timelines have been directly influenced by Andy’s decisions. This group spent much of our 20’s and early 30’s together either as coach/player or on coaching staff together. Between us, there have been 23 coaching jobs (at least) that have covered 7 states. We’ve had amazing seasons and terrible ones. At one point while four of the families here were on staff together we averaged someone having a new baby every 6 months.

The memories are great, but the legacy cannot be ignored.  Andy took a risk with each of these men when he hired them. He took a risk when he created space for us to all learn as dating, engaged and newlywed couples. For Ordell and I, our relationship with Andy and Betsy began when we were still college students, and included two short windows on staff. My story is unique because I was an athletic training student and served Andy’s football teams for a few years.

Andy and Betsy modeled life both on and off the field. We watched them make hard decisions for their family. We watched them pursue the Lord together and individually. Mostly, we experienced life together through meals, games, bus rides, and prayer. Our experience was such a positive one that years later their influence is still easily identified in our current team and staff interactions even with our individual adaptations.

Ordell and I may have a unique story about our time under Andy’s leadership, but similar stories can be told by each family represented here as well as many others not pictured. Andy is an example of how the impact of a coach extends well beyond the games he coaches.

There has been a lot said about how a coach influences his players, but it extends further. A head coach models for his staff how to treat their wives and children. He sets the tone for the discipline of players as well as community interactions. As his staff learns by observing him and working directly with him their personal coaching philosophies are formed.

Just as a coach’s influence will help young coaching families learn how to survive the football life he can just as easily model how not to do things. We’ve worked with those coaches too. But it is Andy to receives our credit and appreciation for all that has transpired the last two decades. 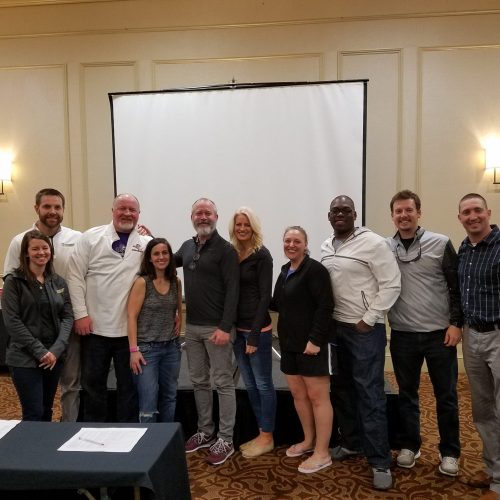 It may seem crazy that Ordell and I would drive 12 hours in a weekend to spend time with this group, but we wouldn’t have it any other way. It’s great to know there are people who understand you without having to explain things, but to sit with them for even a few hours in person is worth the investment. To get to celebrate Andy for a few minutes was the icing on the cake of an amazing time away.

Sometimes the best thing you can do for yourself moving forward is to remember how far you’ve come and acknowledged those that helped you along the way. It’s worth it to do so, even if it takes a 6-hour drive to do it in person.