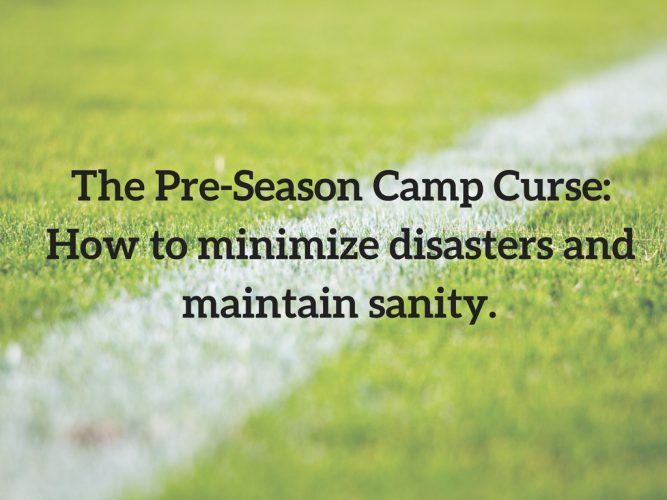 If you have ever been around a coaching family as their season begins you may have noticed a pattern. As soon as players report disaster strikes. While many assume this is coincidence, seasoned coaches’ wives know better. This scenario has what I have titled The Pre-Season Camp Curse. Lest you think I am being overly dramatic I’ve inventoried the past 17 Augusts and I’ll highlight a few of my favorite camp memories below.

Here’s How I Handle the Curse

While I can chuckle now at the insanity of past August disasters, I’ve learned that it’s impossible to avoid the crazy. What will happen will happen so instead, I’ve learned to implement a few strategic August boundaries to minimize the effects of the Pre-season Camp Curse.

Each summer I spend a little time adding meals to the freezer in anticipation of the days when dinner time is hectic in August. By preparing the basics ahead of time the expense of a “disaster” is reduced. For example, when the oven breaks we don’t need to eat out. Dinner is in the freezer. When the car breaks and we’re stuck at home we don’t need to order pizza, because dinner is ready.

I also prep ahead by using August to turn over clothing wardrobes, gathering school supplies and purging the house. These tasks keep my kids busy in those last days before school which minimizes fighting. These things also set us up to cost a bit through the fall. The yearly routines are necessary so it’s not seen as busy work.

Much of August is spent on the football field, so there isn’t much time for fancy meals. Fresh veggies and grilled meat are enough to keep everyone running and reduces the grocery store stops as well.

The calendar is also simplified. We have one commitment at the beginning of August. Football. This doesn’t mean we don’t spend time with friends, but we do eliminate many things from our calendar. We don’t travel (we’ll do enough of that September-December), we don’t have overnight visitors (everyone sleeps in their own beds), and we don’t overschedule our days.

When I awoke to zero electricity and a bunch of strange men in my driveway I couldn’t call Ordell, but I could call my friend Sharon. Her husband, a lineman was likely to have some idea of what I needed to do and say. Turns out Sharon did too and she also knew the men so she could put my mind at ease and help me ask the right questions.

When the pipe collapsed I asked friends if we could crash at their homes until on-campus housing was available instead of dealing with a home without water. This may seem silly, but I know plenty of coaches’ wives who would rather go it alone than ask for help…and it’s completely unnecessary.

When the boys were little I found babysitters in August so I could get a break from being alone with my boys all day. Simple things like running errands were no longer stressful and we were all happier in the end.

While the camp curse is frustrating, it doesn’t need to completely derail you! Take a breath, ask for help and head to the football field. All will even out once pre-season camp ends. And until then…may the odds be ever in your favor. 😉