I’ve written about the need to respond before. I’ve also written about character and how we influence people even when we aren’t trying. Today is about action. This past weekend a group that has recently felt empowered by the words and actions of political leaders choose to exercise their right to free speech (or their interpretation of that freedom) causing chaos, hatred, and death.

We attend a very diverse church in an even more diverse city. That hasn’t always been the case, in fact for the past 16 years prior to our March move we lived in white communities. The past four years the Confederate flag was a common sight. It was just a few hours drive from Charlottesville Virginia. In my interactions with community members, I have learned a few things that may or may not be true for you.

You may wonder how these three statements tie together. I’ll explain, but before I do so I need you to hear and accept one thing. It does not matter your age, gender, religion, life status, or race. The time of sitting back with inaction no longer exists, and it is likely not coming back.

Our campus pastor at our diverse church is white. He said just a few words about Charlottesville, but they have shaped this post. He said that as a white man he often feels he doesn’t have the authority to speak out when tragedy strikes. That people might wonder who he is to say something. And then he condemned the actions of the white supremacists. And that was all he needed to do to confirm to me our family was in the right church for this season of our journey.

How to Not Stay Silent:

You don’t have to get on social media to acknowledge others around you are wounded. You don’t even have to agree with their feelings. But if your circles of people include minorities and the new is filled with white supremacists blasting minorities taking the time to say “Hey this is awful and I don’t agree” is the kindest thing you can do. If you want to take it a step further and offer to be a listening ear, well, that would likely not be ignored. But here’s the thing. Acknowledgment is NOT defensive.

There is plenty of information about ethically sourced products when it comes to human trafficking. All of it is worth exploring. But in this case, I’m speaking of ethical purchases when it comes to choosing who you support and who you do not.

Do you have a friend who is outspoken about how great the white supremacist rally was? Let’s say this person is also a business owner. I suggest you shift your business elsewhere. If possible, to a competitor who is a minority.

Do you designate some of your finances for donation? Consider Yes You’re A Racist, who has already successfully gotten one person fired from the weekend.

One of the most frustrating aspects of this type of event for me is that the people who are spewing hate often do so while aligning themselves with the church. They will even take Bible verses out of context to justify their hate.

There is no better way to fight this than with prayer. Psalm 2:10-12 “Now therefore, O kings, show discernment; Take warning, O judges of the earth. Worship the Lord with reverence. And rejoice with trembling. Do homage to the Son, that He not become angry, and you perish in the way, For His wrath may soon be kindled.
How blessed are all who take refuge in Him!

There are midterm elections coming up, and in some areas, there are special elections happening. It is important that many factors be weighed when voting or abstaining from a vote in the future. Whether you felt your vote was the ethical choice or not, it’s vital to remember that words AND actions matter. There is no room for sarcasm and joking for political or church leaders when it is at someone else’s expense.

Still wondering how my three observations apply? If you live in an all white community that is by choice. You need to remember that minorities who move into those communities are most likely doing so for a job. Unlike you, they will spend their working, shopping, and worship hours surrounded by people who do not look like them. Whatever you have learned about minorities from television is likely exaggerated. Take the time to get to know the people around instead of hanging on to your assumptions. Finally, speak up through words, actions or both. Tell those in your community that what happened in Charlottesville is not invited into your town. And don’t stop talking just because things settle down. Racism hides until it’s given permission to speak. It is a sin, and sin roots itself deep. Call it out, shame it, and speak the truth. That is the way to love your neighbors, regardless of their color.

Before you respond consider this graphic: 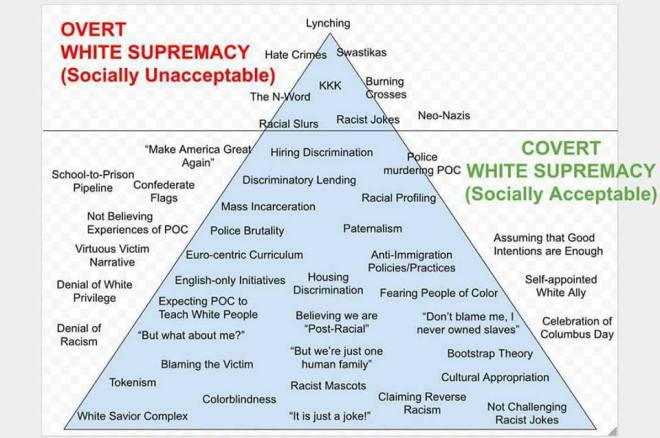