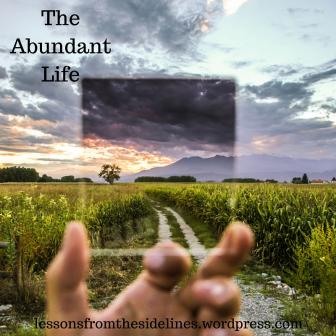 I’m wrapping up my thoughts today on the LifeWay Abundance Conference I attended in February.   Lysa Terkeurst wrapped up our weekend learning about the abundant life and I don’t think there was any better way to do so!

Lysa reminded us that in order to live an abundant life we need to work through conflict. Personally, when I look at what is keeping me from an abundant life, this area may be the area I need to focus on the most.

Lysa took us to 2 Chronicles 20   ” 2 Some people came and told Jehoshaphat, “A vast army is coming against you from Edom,[b] from the other side of the Dead Sea. It is already in Hazezon Tamar” (that is, En Gedi). 3 Alarmed, Jehoshaphat resolved to inquire of the Lord, and he proclaimed a fast for all Judah.4 The people of Judah came together to seek help from the Lord; indeed, they came from every town in Judah to seek him.”

“Our feelings are good indicators of what we need to focus on, but poor dictators of how to act.”  Lysa Terkeurst.  Jehoshaphat was alarmed.  He could have responded in fear by running.  He could have cursed God, but instead he inquired.

13 All the men of Judah, with their wives and children and little ones, stood there before the Lord. 14 Then the Spirit of the Lord came on Jahaziel son of Zechariah, the son of Benaiah, the son of Jeiel, the son of Mattaniah, a Levite and descendant of Asaph, as he stood in the assembly. 15 He said: “Listen, King Jehoshaphat and all who live in Judah and Jerusalem! This is what the Lord says to you: ‘Do not be afraid or discouraged because of this vast army. For the battle is not yours, but God’s. 16 Tomorrow march down against them. They will be climbing up by the Pass of Ziz, and you will find them at the end of the gorge in the Desert of Jeruel. 17 You will not have to fight this battle. Take up your positions; stand firm and see the deliverance the Lord will give you, Judah and Jerusalem. Do not be afraid; do not be discouraged. Go out to face them tomorrow, and the Lord will be with you.’ 18 Jehoshaphat bowed down with his face to the ground, and all the people of Judah and Jerusalem fell down in worship before the Lord.19 Then some Levites from the Kohathites and Korahites stood up and praised the Lord, the God of Israel, with a very loud voice.” “

Jehoshaphat’s public inquiry of God was an example to his whole kingdom.  In that example and choice God honored his prayers!  “Our eyes are on you.”  Oh to be able to pray that immediately after feeling alarmed!

Lysa reminded us that this is an example of our calling from God as well.  Our job is to be obedient to God, God’s job is everything else.  Everything!  There is nothing that he asks us to do alone.

So why is it important we discipline ourselves to respond first?  When our eyes are on God our problems are put into perspective.  Alarmed can turn into determination.  Also, when we keep our eyes on God we are given his peace.  2 Chronicles 20:29-30 “The fear of God came on all the surrounding kingdoms when they heard how the Lord had fought against the enemies of Israel. 30 And the kingdom of Jehoshaphat was at peace, for his God had given him rest on every side.”

When we live in peace our responses are more measured, which of course leads to better relationships.  “We have an abundant opportunity to decide if we are going to walk in our circumstances or in the fullness of God.” This is a daily decision, and I’m working on it.  What about you?

Any cookies that may not be particularly necessary for the website to function and is used specifically to collect user personal data via analytics, ads, other embedded contents are termed as non-necessary cookies. It is mandatory to procure user consent prior to running these cookies on your website.