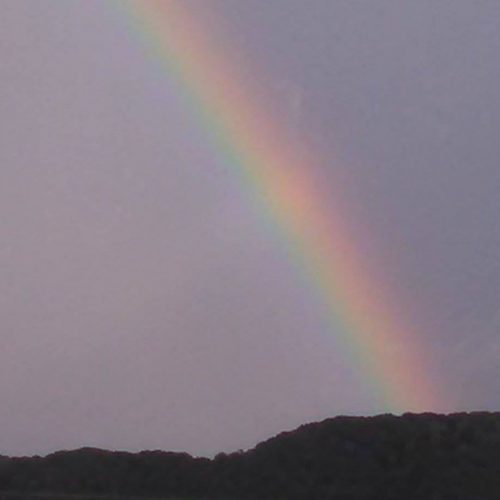 Over the weekend this photo popped up on my Facebook feed.  It was taken fairly close to our house, but I missed it.  I commented on how cool it was, and the photo taker replied that it was actually a double rainbow, but the camera didn’t show all its beauty.  The next morning I saw a few other comments, and right under my conversation, someone had said “That’s the beauty of rainbows. They’re most beautiful for the people experiencing the storm.”

The first rainbow ever viewed was in a storm.  Actually, physically the rainbow was revealed after the storm, but for Noah and his family, life as they knew it had changed. Genesis tells us that Noah and his family were on the Ark for 150 days while God flooded the earth drowning everything still on land.  In Genesis 9 Noah’s family is charged with repopulating the earth.  Can you imagine the weight of having to restart your lives after everything and practically everyone you have ever known drowns?  That is a bit of an emotional storm no?

So, after God blesses Noah’s family, they are shown the first rainbow.  Genesis 9:11-13 “I establish my covenant with you: Never again will all life be destroyed by the waters of a flood; never again will there be a flood to destroy the earth.  And God said This is the sign of the covenant I am making between you and me and every living creature with you, a covenant for all generations to come: I have set my rainbow in the clouds, and it will be the sign of the covenant between me and the earth.”

If you have ever been lucky enough to see a rainbow you know that it is quite a sight. They are the fuel for legends for a reason.  Rainbows honestly do seem to show up without reason and without end.  I bet that first rainbow was full and bright and clear.  God was making a promise, and he didn’t want Noah to miss it.

In Angie Smith’s study Seamless she says “Now, maybe you just saw an image in your mind of a pretty little rainbow and it’s taking the edge off the whole mass destruction part, but you’re not all that inclined to be moved by the gesture. But what it signifies is something profound and entirely indicative of the enduring love that God has for His people, and a reminder to us that He has chosen to be in relationship with us.”

Think about it for a minute.  The rainbow is revealed by God after he wiped out ALMOST the whole earth.  God could have completely started over, but something in Noah and his family made God decide that he would keep Noah around to restart things.  So, when we see a rainbow today, we are not only being reminded of God’s covenant promise after the flood never to destroy the earth in that manner again, but we are being reminded that as Angie Smith says “Even when we didn’t deserve it, God gave us another chance.”

I’ve written about it already, but life has been a bit of a storm personally the last few weeks.  This last week in particular things seemed to amp up even more.  The truth of the matter is, I’m tired.  I’m sick of the loudest bully getting to control the story.  I’m exhausted from the emotional beating that others seem to think I’m asking for.  I’m tired of prayers going unanswered.  If I pause to boo-hoo long enough, I can easily rabbit trail down the wrong thought path.  I wonder if Noah and his family felt the same while tossing around in an ark filled with animals.  I wonder if they got sick the heavy stench that was a constant reminder that they were stuck on a boat, with a whole lot of animals and not enough people.

The trauma of those 150 days at sea was likely not quickly forgotten.  Similarly, nowadays, wounding words are not easily forgotten.  Just like present anxieties are not easily forgotten, God knew that Noah and his crew were shaken up.  His response was to give them a visual sign that He was moving forward.  God promised a new process and way of doing things.  He promised that never again would the whole earth be wiped out.  You know how we know God keeps his promises?  That was one of the earliest ever recorded, and he hasn’t gone back on it yet!  Not only that, but every once in awhile, we get to see that vivid reminder for ourselves, and sometimes, it’s exactly when we need it most! And if we can trust that promise, I guess we could easily make the step that God keeps all His promises.  Like the promises to hear us when we cry out to Him or the promise to carry us through our hardest times.  “That’s the beauty of rainbows. They’re most beautiful for the people experiencing the storm.”