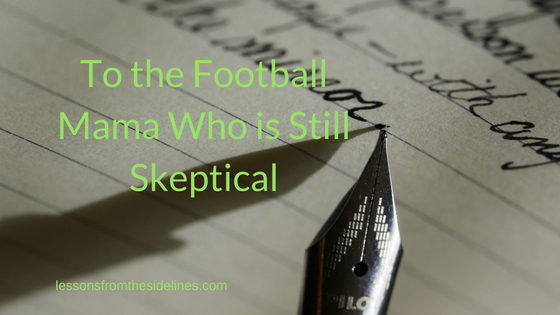 I saw you out of the corner of my eye last night. I could tell you were surprised to hear my husband speak so honestly about the team. As he explained his philosophy about football being more than just a game, that it is also a tool to teach players to become men you seemed interested. He asked for your help in this journey and I could see the hesitation.

If you have had similar Mama experiences to the ones I’ve endured you know that not all coaches are the same. Coaching philosophies are as varied as coaches and you have likely had a coach let you down a time or two. If not you, then your son has certainly experienced disappointment from a coach who revealed their commitment was perhaps not all they originally presented.

I understand disappointment too Mama. My sons have had coaches who have built up their self-esteem, and those who have instead caused them to doubt their ability. I’ve experienced the frustration of a team that doesn’t live up to its potential and watched as disappointment overshadowed all that could be.

One Mama to another, I wanted you to know that I’m just as hopeful for this football season as you are. More than that, I’m expectant. You see, although you heard your son’s new coach’s philosophy talk for the first time, I’ve heard it much more. It was not my first, nor last time hearing my husband speak about the passion that drives him, the conviction that we both have.

I wonder if I might be able to set your mind at ease a bit as we begin this journey together. Our paths won’t align for long in the timeline of a lifetime, but the principles my husband will work tirelessly to teach your son will stay with him a long time. I know this because not a year goes by without former players reminding us of how their time playing football for my husband has shaped their future.

Further, Mama, your son is in good hands. His new football coach will be setting a new tone, but he is doing it with a lot of attention to detail. His job does not end when he leaves the field. Outside of teaching and coaching hours, he is watching game film, preparing team talks, meeting with coaches, reading for personal development, and watching more film.

He’s also doing some things much more important than all listed above. First, he’s working to develop our two sons at home into the leaders and men he believes they can be. Second, he’s practicing what he preaches. He’s serving his family, treating people with respect, working hard to respond well in tough situations, and striving to be a great communicator.

The season waits ahead of us, and regardless of buy-in games, practices, lifting, study hall, travel, and fundraisers will all happen. We don’t know what the scoreboard will show when the timer runs out, but the thing is, we can have a successful season regardless.

There are so many battles to win besides the one that happens Friday nights under the lights. And the best part is that all these other battles can all be won when the best decisions (not always the easiest) are executed. As your son is faced with decisions to encourage instead of complaining, speak respectfully instead of arguing, play with excellence instead of laziness you can cheer him on, and remind him when he needs it.

Don’t hesitate, Mama, you aren’t alone in this process. Your son’s football coach is doing his part. I know, because I’ve watched him do it for 21 years, and he isn’t stopping anytime soon. Regardless of past experiences, this time a great coach is leading things. Trust the process, it will be worth it.